Here is the next installment in our Mosin Nagant series .......  The Mosin Nagant M 91/30 Bayonet, and what to do when your bayonet does not fit on your rifle! (This is exactly the position that I found myself in when I went to set up my new Moisn Nagant Model 91/30) 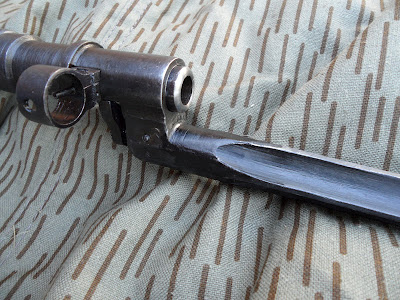 The Mosin Nagant M 91/30 rifle is equipped with, and issued with, an 18 inch spike bayonet..... a very impressive, intimidating and formidable, ornament for your rifle.....  But what do you do when the bayonet won't fit on the muzzle of your new rifle?  You make the PROPER adjustment, of course!

Since many of these rifles were refurbished and then stored away in the old Soviet Union fifty or more years ago, they more than likely became separated from the original bayonet.  When the replacement bayonet is mated up with the rifle, they often do not fit together at all, or fit so tightly that the bayonet can barely be installed or removed without great force or need the use of a hammer.  What we want is that perfect and smooth fit like the original armorers intended.  A quick search of the internet and YouTube will reveal many "instructions" on the "Bubba Repair Method".......... you know the type of repair:  "Take a file, grinder, Dremel Tool, hammer, etc. and totally screw up the bayonet socket as you grind and file away metal until it fits, sort of".  The repair I am going to show you how to do, is fast, easy, and the CORRECT way to adjust a Mosin Nagant bayonet so that it fits, without damaging or marring the bayonet or socket.  Remember that these rifles are not only just fun shooters, but are also a unique pieces of history and deserve to be preserved respectfully.

Before we begin, let's take a quick look at the Mosin Nagant Model 91/30 spike bayonet and how it is attached.  The barrel of the Mosin Nagant rifle is tapered, with a square based, front sight.  The socket of the bayonet is also tapered, hopefully with the same sized taper as the barrel.  The socket on the bayonet slides over the barrel.  The square sight base serves as the locking lug  to hold the bayonet on.  When sized and adjusted correctly, the bayonet, barrel and lug all slide together with great ease, and when locked, make a tight and solid unit.

Here is what to do when they don't:

What we are going to do in this repair-adjustment, is to gently tap a tapered bar into the socket, to ever-so-slightly, expand the socket until it fits the barrel. Remember, the socket is tapered.... larger in the rear and smaller at the spike end!

You will need a large metal splicing fid, a tapered rod, or the end of an old Mosin Nagant rifle barrel with the sight ground off..........  since most of us don't have an old barrel laying around, let's grab a metal Taper.  You will also need a hammer with a brass face, or a hammer and a brass punch.  You will also need a vise to clamp your bayonet in.  The vise jaws need to be wood so you do not damage the bayonet when clamping and hammering. 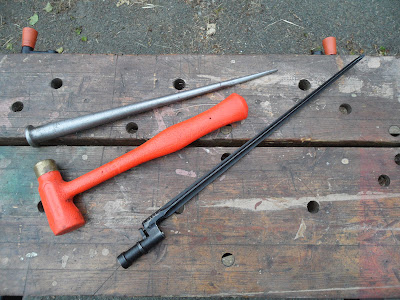 Firmly clamp the bayonet in the jaws of the vise, with the open groove to the top. 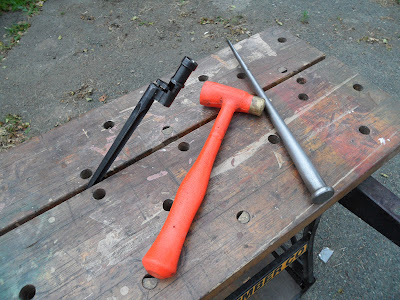 Insert the metal taper into the socket and TAP it in until it is tight.  Then tap out the taper and try the bayonet for proper fit on the rifle barrel.  If you need to tap the bayonet or taper to get the two separated, use the brass faced hammer or brass punch so you don't damage the bayonet!  Keep tapping and fitting until the bayonet slides on to the rifle barrel easily. 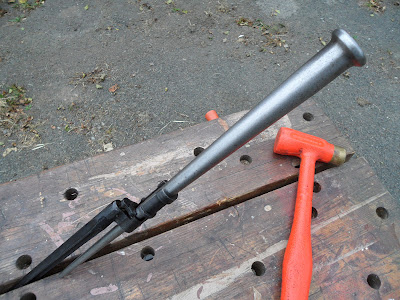 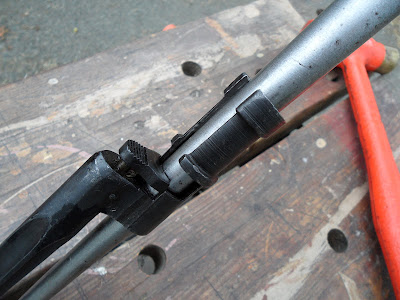 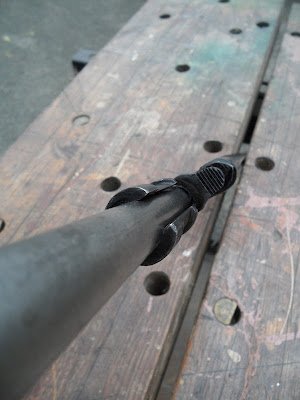 You may need to expand the top (spike end) of the socket a bit by itself.  In this case, tap the taper in at an angle from the top of the slot.  Be careful, go slowly, and be gentle.  Small taps, remove, then check the fit! 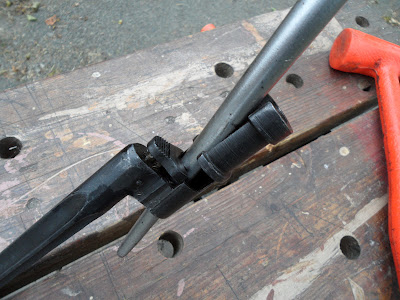 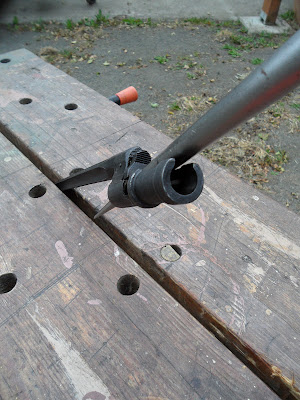 If you need to tighten up the socket because you expanded it too much, then you can squeeze the socket in the wood faced vise, just a bit to close it, or tap it with the brass faced hammer.  The adjustments you should be making are MICRO!  Work slowly and tap softly.  It is better to take your time and get that perfect fit rather than forcing things too far in either direction.

Congratulations!  You just made a PROFESSIONAL and CORRECT adjustment to your bayonet!

Now let's take a look at the details of a Mosin Nagant M 91/30 bayonet.  Here are some photos of mine: 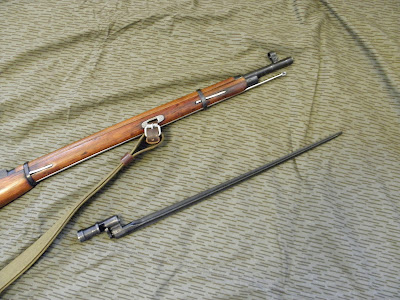 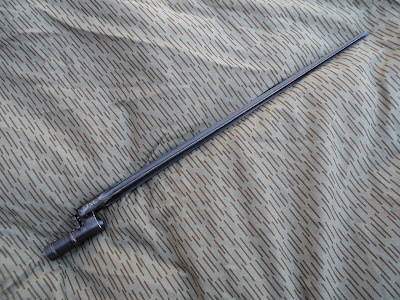 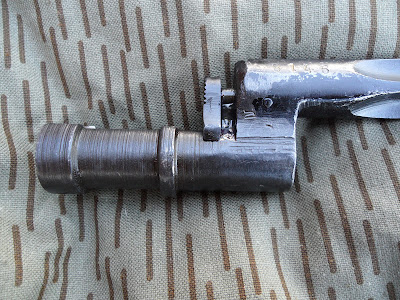 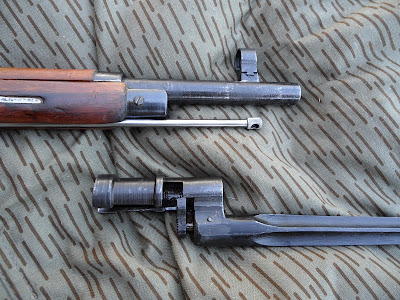 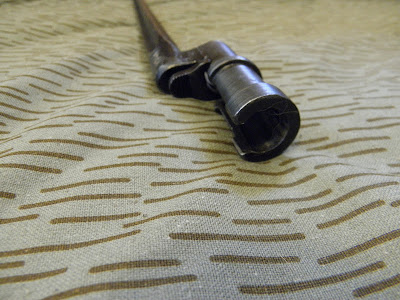 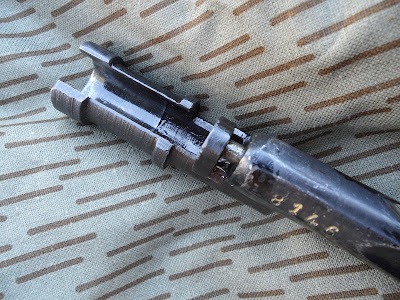 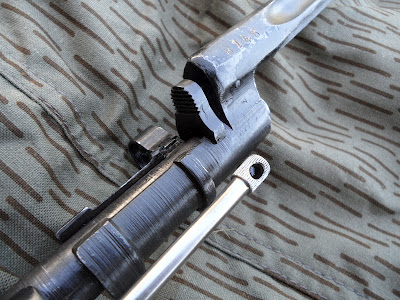 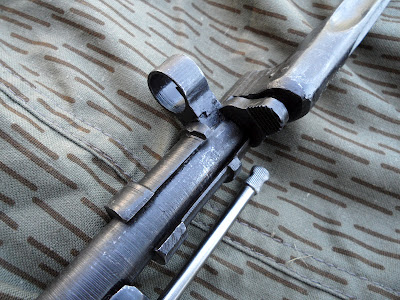 Where would I find a splicing fid like the one you have there?

I was lucky enough to find my large steel splicing fid at a local yard sale many years ago. You can make one with a large bolt and belt sander or grinder if you are so inclined. I have made a number of smaller ones out of old bronze bolts. They turn out beautifully!

How did the soldiers carry the 91/30 bayonet? Does the bayonet mount on the rifle or was their a scabord?

Brilliant! I found a small splicer fid and held it in my hand and it worked perfectly! Especially since mine is a Spanish Civil War rifle! Thank you!

That is not a splicing fid, it is a Marlin Spike. A tool used by sailors for splitting line for hundreds of years. Most are custom built but can be found on Amazon for $50-$100. Almost the cost of the rifle itself.
Awesome find!

The only real difference between a "fid" and a "marlinspike" is the purpose. If it is used for rope and canvas, then it's a fid. If it's used for metal wire cable, etc., then it's a marlin spike. Fids can be made from wood (traditional), or can be made from plastic, or metal (yes, even metal!). You can buy them new, or make one from scratch (traditional). I have a number made of bronze that I use for line work and splicing. They are bronze (metal!) and I use them for splicing lines, so they are a Fid. I start with a large bronze bolt and then file it down to a nice taper and a good fit for my hand. You can find quite a number of open-end box wrenches, and adjustable wrenches that have long, tapered handles that are basically a "marlin spike" with a wrench on the end. The tapered handle is used to align bolt holes, but work equally well as a marlinespike.....or adjusting Mosin Nagant bayonets! Check out eBay, thrift stores, or any used tool shop, and you may find one (cheaper than the cost of a rifle, and definitely cheaper than a new marlinspike on Amazon!). Happy hunting, and adjusting :-)