This post is an update to a previous post that I made back in 2011, about my Kat K55K Mercator pocket knives.  I had mentioned that I had learned that my uncle had an original, WW2 vintage, Kat pocket knife that was brought home by my Grandfather after his WW2 service in France and Germany. Well, the knife was passed on to me and now it has found it's way onto the blog. 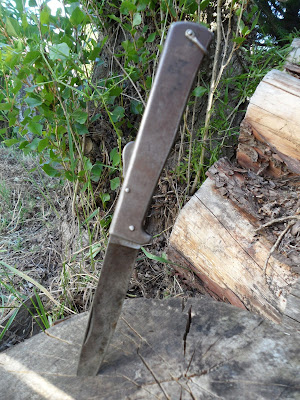 Here is a link to that original post:
http://sharky-fourbees.blogspot.com/2011/04/mercator-pocket-knives-k55-kat.html


To get things started, here is the "short-story" behind this knife:

This knife was picked up in Germany or France by my Grandfather, William R. Spannaus, while he served with the 405th Q.M Company in Patton's 89th Division.  I am guessing that he most likely took it from a German prisoner towards the end of the war.  Some time after the war, the knife was given to my Uncle, who carried it as his "daily carry" knife as a kid.  My Uncle kept the knife all these years and passed it to me a while back.  It is now in "My Grandfather's WW2 Time" part of my greater collection.

You can read about a couple of other items he brought back at these blog links:

This knife is marked "D.R.G.M.", which means Deutsches Reichs Gebrauchs Muster.  In English, this means "Protected Patent under the Reich Government".  The D.R.G.M. markings were used from 1891 until 1952.  In 1952, the patent stamping was changed to "D.B.G.M."  The "B" in the post-war patent stamping means "Bundes", or Federal, in English.

There were some interesting variations of these knives through the years that can help us date them to a particular era:


These Kat knives were not officially issued to German soldiers, however they were wildly popular with the German troops and most of them had a private purchased one in their pocket.  They were quite coveted by the US soldiers and many of them found their way back to the US after the war as souvenirs.

Mercator is still producing these knives for modern sale, using most of the same old equipment and in the old hand made way.  The older WW2 Kat knives were a bit larger than the currently produced knives though.  You can read more about the modern produced Kat knives in my previous blog posting.

Here is the photo album of this knife.  I have taken most of the photos side-by-side with a modern version of the Kat knife for comparison.  The WW2 knife is all bare metal finish and the new Kat knife has the black paint.  Originally the WW2 version would have had black paint as well, however it has all worn off. 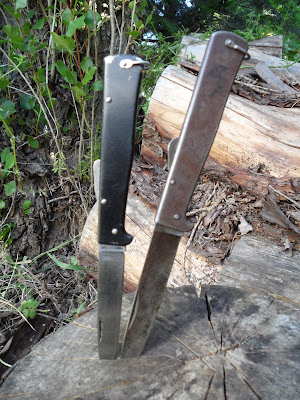 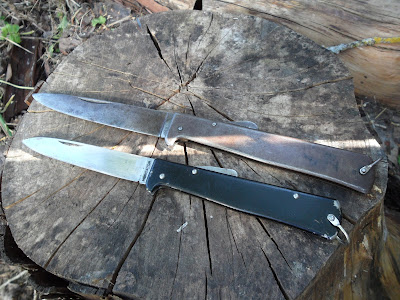 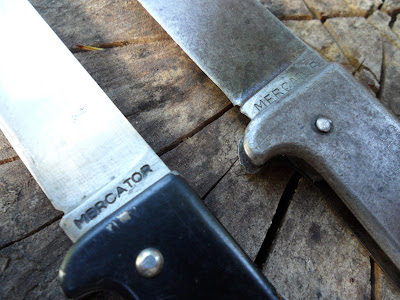 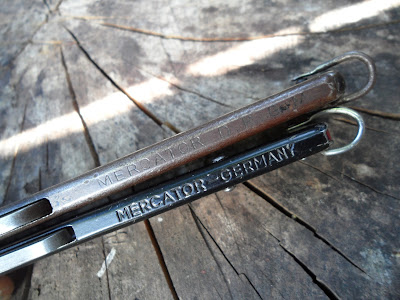 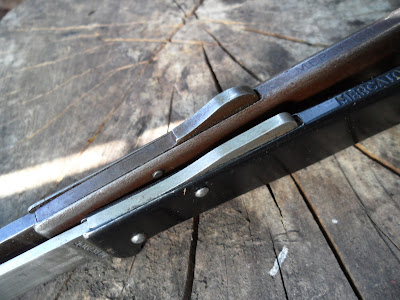 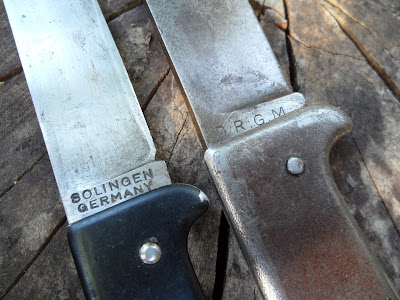 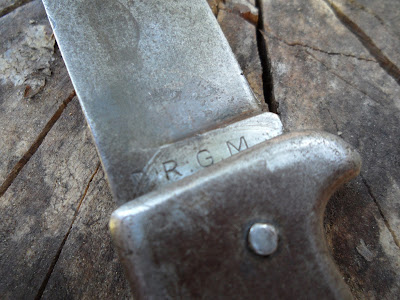 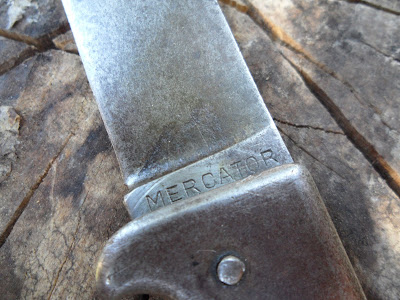 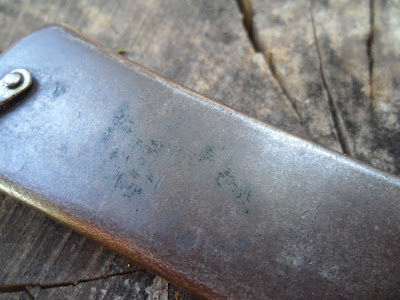 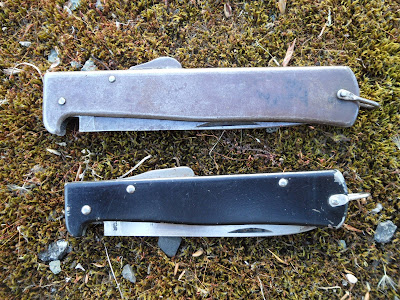 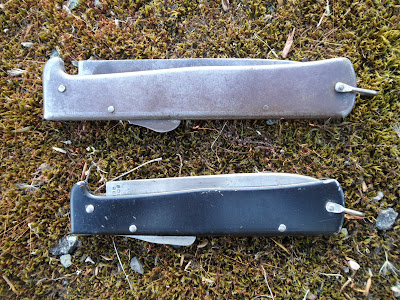 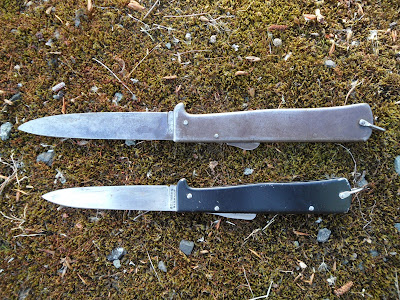 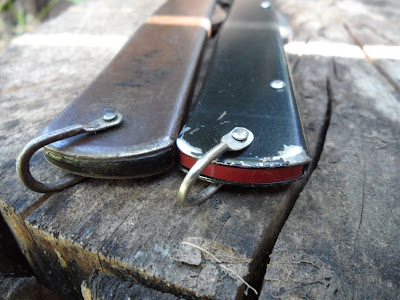 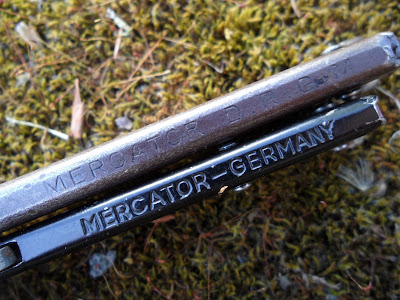 I used to have a Kat knife when I was a kid. Yeah, we carried knives in our back pockets, all the time. I got my first 'pocket knife' (a CaseXX bone handled two-blade) for my 7th birthday, with explicit instructions from dad "If I ever hear about you using this on anyone... I'll break the S.O.B., you understand?" I carried it everyday until I got the Kat from my uncle. He got it under similar circumstances to your story. Anyway... He had it when he was a kid. That makes it a late '40's to early '50's model. I remember, perfectly that it had about 75% of the black paint rubbed off, and NO stamped imprint of a cat at all. It definitely had D.R.G.M. stamped on the blade. The carbon steel 'lock' portion of the blade snapped off and it became useless. Eventually lost to time in my menagerie of garage gear. - jef G

Hi,
I have one that has the word "bison" within a diamond shape engraved on the base of the blade. It has a red spacer. Do you know how to date it?
Thanks.

Here is the info I give anyone selling these 'look-alike' knives. And there are a few of them...

If it doesn't fit the description(s) below, you can bet that it is probably a fake. I have even had people trying to sell them as 'German' and when I first see them, I zoom into the picture to see, right there on the blade, 'Japan' is stamped. It doesn't get anymore obvious than that, but people want it to be -- what they want it to be. Go figure.

Here is some of what I've compiled.

The "K55K Cat" stamp on ONE side would indicate your knife is a 1995 addition. Sometime, in that same year, and beyond, they added stamps to BOTH sides. All in an attempt to sell more knives.

Otter-Messer bought Mercator from Kauffmann in 1995, Kauffmann owned the Mercator brand from 1856 to 1995. Kauffmann is now a division of Otter-Messer. From 1891 to 1952 the edge and tang of the Mercator Knife was marked Mercator D.R.G.M. "D.R.G.M.", which means Deutsches Reichs Gebrauchs Muster. In English, this means "Protected Patent under the Reich Government". The D.R.G.M. markings on the handle side used from 1891 until 1952. In 1952, the patent stamping was changed to Mercator-Germany on the side of the handle.

WW2 era Mercator's are ALWAYS marked "D.R.G.M" on the side of the handle. Post-War 1953 and newer knives always have "Mercator-Germany" on the side. The knives that were made pre-1952 were also about a inch larger than the Mercator's made Post 1953. Also from 1953 to 1995 the spacer inserted at the rear of the knife was red on most of the knives, after 1995 it was change to black, this was done right after Otter-Messer bought the rights from Kauffmann.

I have just been cleaning out some old tools of my late grandfather's. I found a metal lump at the back and started to clean the grease off. I found one of these knives. He served in WW2 and I was looking at trying to age mine. I'm guessing it's an early one off the information above. Beautiful looking knive in working condition too.

Yeah! Show those poor, misguided treasure-seekers what a REAL WW2 Mercator knife looks like! Thank you!